Swim PEI is excited to announce Marguerite Middleton as this year’s recipient of the Honourary Lifetime Achievement Award!

This award recognizes the many years of meritorious service to swimming in Prince Edward Island by an individual (or group). Through a long association with our sport, this person has shown leadership, been supportive and encouraging and has made significant contributions to the development and growth of swimming.

For the past 25 years, anyone who has been a part of the competitive swimming community has met and worked with Marguerite Middleton.

Marguerite has been involved with the sport of swimming since 1996 and has been a swim parent, club board member holding an executive position as the Treasurer for over 10 years, a Swim PEI board member since 2008 holding positions as Secretary, Treasurer and President at different times and still holds an executive position today. In 2009 Marguerite assumed the role of Provincial Officials Chair representing PEI on the National Officials Committee and subsequently the Provincial Official Development Committee. Marguerite is currently the appointed representative for the Atlantic Provinces on the Officials, Competition, and Rules Committee for Swimming Canada. Marguerite has been and continues to be the person with the most experience and knowledge about the sport of swimming in the province when it comes to competition and officiating. She has given countless volunteer hours of her time to the swim community and is always ready and willing to help on the pool deck in any role.

Marguerite has been a certified level 5 Master Official since 2007 and was a key official for the 2009 Canada Summer Games held in Prince Edward Island. She has officiated at many National level meets specializing as Starter but has worked in various roles. She has represented PEI at Eastern & Western Canadian Championships, Canadian Summer Nationals, Canadian Junior Championships, Usports Swimming Championships and the Canadian Olympic and Para-Olympic Trials. Marguerite is the only Island swim official ever nominated to represent Canada at the international level and has had various appointments from 2014 – 2018. In 2017 Marguerite was awarded the Ken Filippelli Award of Excellence in Officiating” by Swim Canada.

With all this experience Marguerite has always been willing and eager to share her knowledge with officials new to swimming and with those following the Swim Canada Officials Pathways. Marguerite has mentored and trained every new official on PEI for many years. Her dedication and commitment to excellence has developed many swimming officials over the years and has raised the sport to a higher level in this province. Her years of dedication and commitment at the provincial level has elevated her to the point where she is known as the ‘go-to’ person in Prince Edward Island for all things competition and officiating. She is well respected by all the athletes, coaches, officials, and volunteers.

The sport of swimming would not be where it is today in this province without her involvement, guidance, commitment, and dedication to excellence. She is a true volunteer and has made a big impact on the sport of swimming in our community over the past 25 years. It gives us great pleasure to award Marguerite Middleton with the Honorary Lifetime Achievement Award. 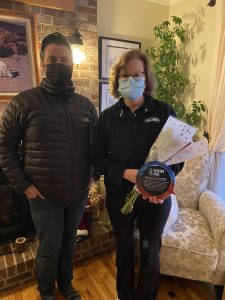